Two female university students pulling up to a construction site in a Chrysler Sebring isn’t the norm at the crack of dawn.

When Mallorie Brodie and Lauren Lake were finishing up their undergraduate degrees at Western University, they would drive around London, Ontario looking for cranes—a towering indication that lead them directly to construction job sites and general contractors.

Those were the early days of Bridgit. The 20-something co-founders met in Toronto’s Next36 incubator. Their idea resulted in a digital management tool which tracks progress and deficiencies for construction projects. The product was the result of interviews with 500 architects, engineers, site superintendents, project managers and construction company executives—and many early mornings visiting construction sites.

Launched in 2014, their mobile-first software ‘Bridgit Closeout’ presented the industry the ability to take photos and notes directly on their device, both improving and streamlining the overall communication process to get the work done and resolve issues quickly. A major upgrade from the status quo of incomplete spreadsheets, loose papers and sticky notes.

As of 2017, more than 10,000 subcontractors have used Bridgit Closeout in cities across North America including Toronto, New York City, Seattle, Miami, Chicago and San Francisco. 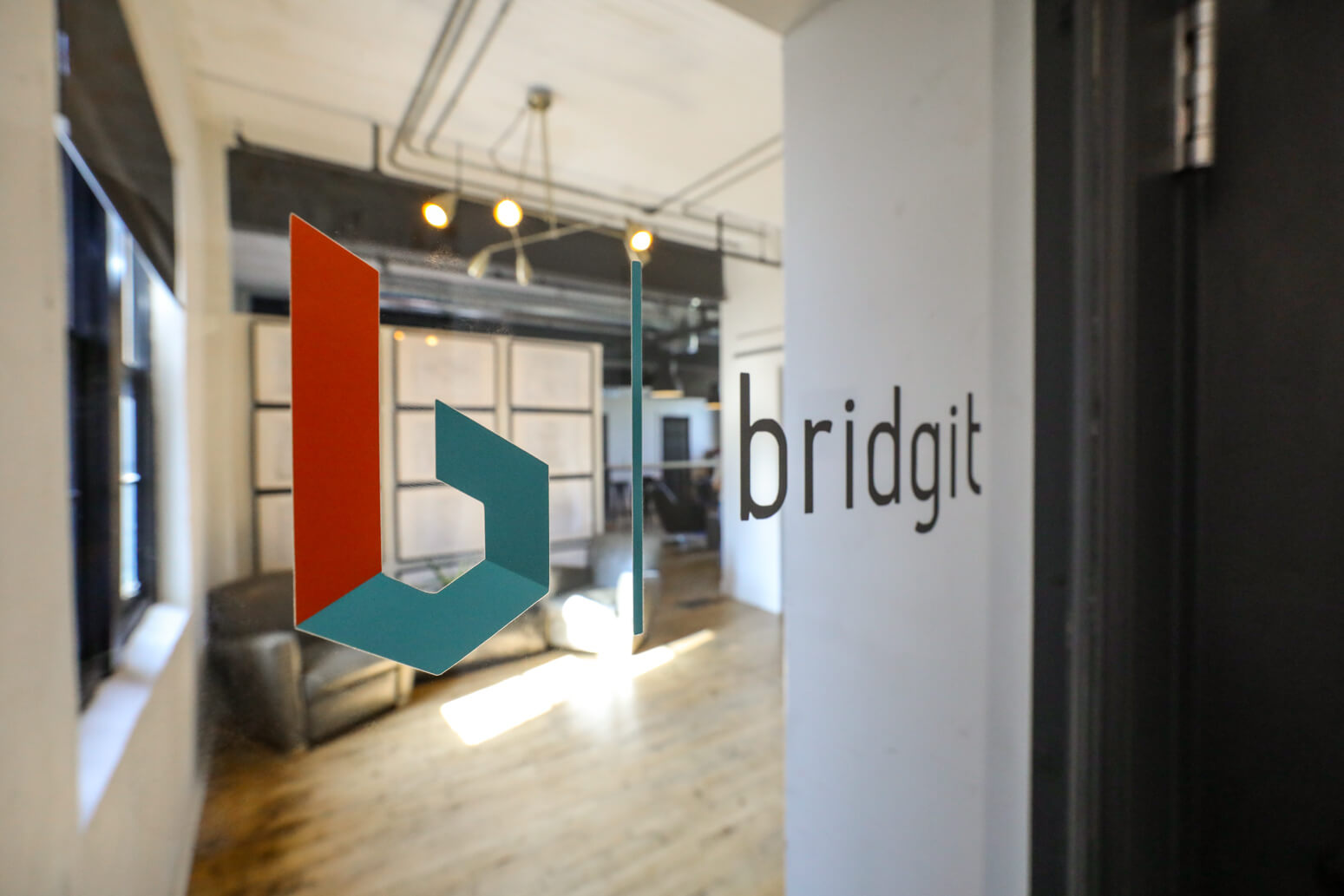 Today the company is run out of Kitchener-Waterloo where Brodie and Lake lead a 30-person team—a staff that’s tripled in the last 18 months. It has had to grow quickly to keep up with the 450 construction projects that are currently underway.

You started this business in your early twenties. Was this your first leap into entrepreneurship?

Lauren Lake: It was my first. Coming from engineering, I always had this desire to start something but I didn’t think it was something that I would be able to do given my degree and not having the business background.

Mallorie Brodie: I was in comparative literature for the first two years at Western before going into the Ivey School of Business. I saw the potential to sell student art online with the idea that it would help build these students’ resumes. I started an e-commerce website and had 35 artists across Canada showing their artwork. Some had success selling prints, but original art was difficult to sell online.

While the business failed, it allowed me to see that obstacles that may seem like huge things when you are first starting out are actually simple administrative-type tasks. Like registering the business seemed like a reason to not start a business. I had no idea how to do that. But turns out, it is a short form you fill out online, you pay your $70, and ta-da, you have a business.

By the time we started Bridgit, those kinds of things weren’t concerning, so we could just focus on the business.

Without actual construction experience, how did you translate the needs of site managers into real software general contractors would actually want to use?

LL: It was not something that just happened overnight. It took place over many, many months. It started with us just showing up on the site, asking tons of questions and piecing together all these different stories from different points of view, finding the common threads between all of them.

A couple sites showed really, really strong interest and wanted to be part of the whole development process with us. We started job shadowing people on site, attended site meetings, and really got the full perspective of how things were happening.

Our initial product research was done in all sorts of different ways. We had drawn up screenshots by hand that’d we show to say, “This is kind of what we’re thinking the product would look like.” And walk them through the steps to get feedback. We used other products that were on the market to test whether people thought they were helpful or not.

We had all these different kind of hypotheses we wanted to prove right or wrong. We tried to think of the easiest and cheapest way to do that. But it took many months of doing that with tons of different people before we kind of arrived at what the final product in our heads would look like.

MB: Looking back on it, I think one of the things we did well was not falling in love with our own ideas. I think it’s really easy to do that especially if you start with an idea before actually going out to validate if there is a market for it.

You have to remove any ego from it, any of that needs to totally go away and you just purely need to listen and quantify—in whatever feedback you’re getting—and let that guide where the bright spot is. Otherwise, it’s just so easy to make really bad decisions.

LL: We never pitched an idea that we already had. It was much more us discovering with them what that solution would be.

You came right out of university and won some market share. How do you think you were able to do this?

MB: We were naive. Looking forward ten years from now, if we were to start another business, I think you would have this checklist in front of you for how that business must meet a set of criteria.

I think that could actually scare you away from starting a lot of businesses because every company has something that doesn’t work quite how you want it to. That’s the reality.

Because we had nothing to lose, we just took it day by day and set short-term milestones. There was never this major fear of failure. We just kept doing the next logical thing.

LL: There should have been times when there was a lot of fear. We just didn’t know any better. We just kept going. We were getting such positive feedback from the people we talked to on the job sites. People were so eager to talk to us.

If we hadn’t gotten that, we would have clued in and known to go down another path. But it was clear that despite what other products were on the market, there was still this huge gap.

MB: And the importance of getting along with your co-founder is completely critical, especially in those early days when you don’t have those business milestones to get you excited. You’re totally reliant on your business partner to create that excitement. You need to get along. You need to be aligned in what you’re trying to accomplish because otherwise it would have been impossible.

The construction industry has a lot of longstanding traditions, as in “the right way to do things.” How did that tradition affect adoption rates for your Bridgit Closeout software?

LL: One of the interesting things that we heard in the beginning of Bridgit—from people outside the industry when we told them our idea—was: “In theory that sounds really interesting, but you’re never going to sell this to the construction industry. They’re too slow-moving, it’s not tech savvy.” That was the outsiders’ perspective.

But then we’d go to these sites, we’d see engineers spending all day trying to format Excel documents and paper notes and we’d ask them, “Why are you doing it this way when you could use some sort of software tool to automate it.” And we’d get responses like, “We’d love to, but there is nothing available that is right for me.”

The sites really hadn’t found an on-site tool that worked for them. It needed to be mobile-first and at that time many products were web-based. It needed to be super simple and able to incorporate these massive teams that were constantly changing. There were all these pieces to it.

It was less about this rigid old school industry and more that people weren’t able to move forward because the right product didn’t exist. We also came at it at this lucky timing, when people were just starting to adopt smartphones on site.

It may seem like an unusual fit to see two, young women entering a predominately male space. Why construction?

MB: We always say if you were to look at both our profiles on paper and didn’t know we were female, you’d think, “Of course they went down this path, it would be so obvious.”

Lauren’s grandfather was a specialty trade contractor, and her parents are entrepreneurs. On my side, dad was in real estate development, my grandfather was in demolition, great-grandfather had a steel company, and I went through the entrepreneurship program at Ivey. When you look at it that way, of course this happened.

I just don’t think it ever occurred to us. This is our experience, these are our degrees, this is the type of family we were raised in—entrepreneurial and construction—so it’s just the obvious thing to do. We didn’t think about it until people started asking us about it.

What are the advantages of being a woman in the construction industry?

MB: We developed a lot of goodwill for our brand and business at a much earlier stage than a lot of startups would have for really one reason: it was unique. It was unique to see two, young females entering the construction software world.

LL: There’s something a bit memorable. Just because it wasn’t what people were expecting. Other than that, we didn’t really think twice about it.

Like many Kitchener-Waterloo companies, Bridgit is competing with tech giants for talent. What’s your strategy when it comes to attracting new talent?

I do think we’ve had a broader number of applicants apply to our roles because it has been studied that when you see female leadership, women may be more interested in applying. So we’ve been able to attract a lot of people that previously hadn’t even been in tech that now made the industry switch. Our team is a 50/50 split. We do think we have a differentiator in that sense.

LL: A lot of tech companies only really hire this one profile because that’s what they know works: an engineering grad from this particular school with this kind of experience. But because we come from different backgrounds than what you typically would see leading a software company, I think we’ve been more open to casting a wider net and finding talent that may have otherwise not fit.

This interview has been edited and condensed for clarity.